Estonia Beautiful Places- What To See In Estonia?

The Most Beautiful Places In Estonia

Estonia, one of the Baltic countries, is a truly unique place. With a vibrant capital- Tallinn, unspoiled nature, and Finland, Russia, and Latvia as neighbors, it’s one of the best places to visit in Eastern Europe. What are the most beautiful places in Estonia?

If you are thinking about visiting this amazing country, check out the list of Estonia beautiful places below and get inspired!

The Old Town of Tallinn was one of the most beautiful places in Estonia. With its ancient, winding streets and colorful red roofs, there are lots to see in such a small area. The Historic Centre was inscribed as a UNESCO World Heritage site in 1997 as it is a perfect example of a medieval European trading city.

After entering through one of the old city’s main gates, the Viru Gate, it’s easy to get lost for hours exploring the cobbled side-streets that meander through. Not far from the Viru Gate is the beautiful walk-way known as St. Catherine’s Passage. This passage leads visitors along with the remains of St. Catherine’s church and there are a number of boutique art shops in which to pick up unique souvenirs.

Make sure to stop for some incredible food in the cozy restaurant Rataskaevu16 which is located close to the old town square. For some of the best views across the city make the brisk hike up to the Kohtuotsa viewing platform for a panoramic view across the red-roofed city.

Visiting Tallinn? Check out this Tallinn walking tour to make the most of your trip!

Tallinn is often renowned for its UNESCO World Heritage Old Town where gorgeous cobblestone streets wind around the churches with tall spires that can be seen from the city’s many viewing platforms. However, the Old Town only represents one period of history in this Baltic wonderland. There are many other layers to Tallinn, even if some of them are not as aesthetically as pleasing as the others. One era that many locals are mixed on speaking about is the country’s Soviet history. But, there are still signs of this Soviet history throughout various districts of Tallinn for those that are curious to know more about the Soviet history of Estonia and its impact on the country’s architecture.
One fine example of Soviet architecture and planning in Tallinn is the district of Väike-Õismäe, a part of the city that is built in a circular form that tourists rarely get to see.  Another area is Lasnamäe, the most populous district in Tallinn and one that I got to see when I visited Tallinn in winter.  Lasnamäe is home to a mostly Russian population even still today and the grocery stores carry mostly Russian goods and everything is written in the aforementioned language.  If you’re not straying too far from the city center, be sure to check out Linnahall, formerly called the Lenin Palace of Culture and Sport, that opened in 1980. The National Library of Estonia is also a renowned piece of brutalist, Soviet architecture in Tallinn.
While many may not be excited to see this part of the city, it is definitely part of its recent history and it is worth exploring if you are curious about that part of the country’s history. It’s one of these Estonia beautiful places that you can’t miss.

While most people visiting Estonia tend to only set their sights on the old town in Tallinn, there is so much more to this Baltic nation to explore! While Tallinn is lovely and very much worth visiting, Tartu, the country’s underrated second city, is one of the best places to visit in Estonia.

Though smaller and more compact than Tallinn, Tartu is a lively university city that has a more artistic and edgy vibe than the capital. While there is a postcard-perfect old town to visit and a great restaurant scene to eat your way through, one of the best things to do in Tartu is undoubtedly taking in its street art scene.

While there is street art to be found throughout the city, the majority of it is concentrated in the trendy Karlova neighborhood, a gentrifying enclave of the city that was, only a few years ago, incredibly low-income and falling to disrepair. This neighborhood is where the annual Stecibility Street Art Festival takes place and there are numerous incredible works of art to take in.

It is possible to take a walking tour of the neighborhood in order to learn more about the artists and the culture of street art in Tartu along with the history and culture of Karlova in general. And finally, you cannot miss the Aparaaditehas complex, a former Soviet widget factory that has been turned into a hub of hip restaurants, bars, and shops

The Struve Geodetic Arc is a series of triangulations done by Friedrich Georg Wilhelm Struve, the geographer, and astronomer from Tartu University between 1816 and 1855. The measurement of the meridian, which used the observatory at Tartu University in Estonia as its base point, represented the first accurate measurement of a long segment of an Earth meridian. These precise observations and measurements by Struve established the exact size and shape of the planet and marked an important step in the development of earth sciences and topographic mapping. The actual Arc was measured over more than 2800 kilometers and stretches through ten countries, from Norway in the north to Ukraine in the south.

The Observatory at the University of Tartu, where Struve worked as an astronomer, was the starting point of the Arc. The determination of the Arc actually grew out of a project Struve initiated to determine the exact location of the Observatory on the Earth.

Saaremaa is the largest of Estonia islands, connected by causeway with third largest island Muhu. Both are an ideal destination for an active and relaxing holiday.

Kuressaare (the capital of the island) is a well-known resort town with ‘the highest number of spas per capita in the world’ according to Visit Estonia. It offers both medical and relaxation treatments, especially world-famous mud baths. Kuressaare’s castle and its charming old town with cafes and bars will not disappoint you either.

For those who would rather be outdoor, Saaremaa and Muhu offer a lot of quiet and mostly flat roads or plenty of paths in the forest to enjoy cycling.

Panga Cliffs are perfect for a family walk and Viidumae Nature Reserve and Vilsandi National Park are paradises for keen birdwatchers.

Old churches and windmills across the island and its old villages will take you back in time. Definitely, do not miss Koguva – the gem of Muhu! Going there is one of the top things to do in Estonia.

If you wonder what to do in Estonia, head to Rummu! This underwater prison is located 45 kilometers southwest of Tallin, making it an excellent day-trip idea. It has been abandoned since 1991 when Estonia regained its independence and drove the Soviets out. The prison was built in the 1940s by the Soviet Union where the inmates were forced to work at the nearby limestone quarry. After both the prison and the quarry were abandoned, water began to seek through the limestone at the quarry. Without anyone there to control it, the water quickly filled up the nearby land and started to submerge the prison. Nowadays, there is more of the prison underwater than there is above water.

Rummu underwater prison has become the destination where people come and sit by the lake and relax. Some decide to dive into the lake and see the parts of the Rummu prison that is underwater while others like to climb to the top and jump into the lake. There is activity there for anyone, so it’s one of the places to go in Estonia that you cannot miss.

Parnu is the most popular beach resort town in Estonia and during the summer months of June to August, many locals and tourists come to Parnu to enjoy its beautiful beaches and weather.

It is famous for its spa facilities and since 1838 has been offering warm sea baths in summer and hot saunas in winter.

If you are there in summer then you can enjoy the beautiful beach promenade that stretches along the beach, with water fountains that light up at night and many bars and restaurants to dine and drink in during the day.

One of the best activities in Parnu though has to be the sunsets. It’s great to go sit on the beach and watch the sunset over the water.

Haapsalu is a picturesque seaside town that still embodies the spirit of old Estonia. Once a popular vacation destination for the old Russian czars, Haapsalu is now the modern hub for international festivals and health spa resorts. Travelers visit Haapsalu for both an adventurous and relaxing getaway.

Haapsalu can be divided into two sections. One that boasts the old town beauty of ancient Estonia. The other that attracts spa lovers from all around the world with its serene, ocean town vibe. You can visit the medieval Episcopal Castle and explore the network of ancient architectures walking next to the Kooli, Vee, and the Jaani buildings. Then you can find quiet solace in the romantic spa resorts such as the Fra Mare Thalasso Spa and enjoy the taste of Estonia at Luscher & Matiesen restaurant. And before leaving Haapsalu, make sure to visit local textile shops and browse through traditional hand-woven woolen Haapsalu shawls. 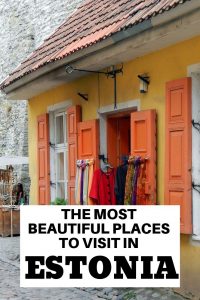 Did you enjoy reading this post? Do you know more interesting things to see in Estonia? Share your thoughts in comments!