Fun Norway Facts That You Haven’t Heard Of!

Peaceful, fun, affordable, forward-looking – what’s not to love about Norway? From its Viking past to its progressive present and green future, Norway is one of the best countries on Earth for both visitors, as well as its own citizenry. What makes Norway such a great place to visit and live, and what other quirks await once you take a trip? Let’s take a trip through this “Norwegian Wood” of fun Norway facts and find out!

Norway Is One Of The Happiest Places On Earth

Move over, Disneyland – Norway might well be the real happiest place on Earth. Why? For one thing, it doesn’t require you to sit in traffic for hours on end with the “reward” being an overcrowded amusement park.

Even more pertinent is the fact that Norway ranks third in the World Happiness Index. That’s a boast most every Scandinavian country can make, actually, with Finland and Denmark just ahead of Norway and the entire region routinely ranking highly in healthcare, education, income, and general quality of life.

As such, Scandinavia might well be the real happiest place on Earth, Norway included.

Norway Is Famous For Its Literature

When you think of great works of European Literature, what comes to mind? Medieval masterpieces? The works of Shakespeare? 19th-century realism and social criticism?

Norway probably isn’t the first European nation that comes to mind when you talk about great literature – and that’s a shame since Norway actually pops up in all of those aforementioned genres.

The most famous worlds of Norwegian Literature are, unsurprisingly, the Viking Eddas and Sagas, which are responsible for much of what we know of Norse Mythology and the way we imagine the Viking Age. Odin, Thor, Freya, Loki – you’ll find them all here. You’ll also find the Old Norse tale of Sigurd – better known as Siegfried, the German mythological hero at the center of Die Nibelungen. As a bonus, if you’re a Lord of the Rings fan, you should know Tolkien was himself a huge Old Norse fan, taking character names (Gandalf) and locations (Middle Earth) directly from Norse Mythology.

Then, there’s Norway’s cameo in Shakespeare’s Hamlet. The play pits Denmark and Norway against one another, with Old Hamlet and Old Norway opposing one another in a rivalry continued through their sons Hamlet and Fortinbras. After seeing the decisive Fortinbras lead his Norwegian troops at the end of Act IV, Hamlet vows to stop delaying and finally avenge his father.

Of course, Norway was home to its own Master Builder of masterpiece plays, Henrik Ibsen. A towering figure of 19th-century realism in theatre alongside Strindberg and Chekhov, Ibsen was also one of the great feminist authors of his age, with the titular Hedda Gabler and Nora in A Doll’s House ranking among the most prestigious showcase leading roles for actresses throughout the world. Furthermore, Ibsen’s works are, after Shakespeare, among the most performed all over the world.

From The National Theatre in Oslo to The Litteraturhuset celebrating the literature of all kinds, Norway’s rich literary and theatrical heritage is on display for all to see.

Norway is Committed to Peace

The Nobel Prizes are a yearly testament to what we are all capable of when we commit ourselves to the noblest and noblest of Nobel-worthy virtues. Chemistry, Medicine, Literature, Physics – they are all awarded in Stockholm, in neighboring Sweden.

The Nobel Prize for Peace, however, is awarded in Oslo, forever tying Norway’s capital to the cause of peace.

You Can Literally Find A “Hell’ In Norway

It can be easy to imagine Norway as a winter wonderland, but what if you’re none too fond of the cold?

Well, you might try going in summer, for one. While we tend to have an image of places such as Norway, Sweden, and Russia as blizzard-ridden winter-fests year-round, that simply isn’t true, with summers there being quite comfortable.

Still, if you’ve arrived in Norway and are still shivering away, you may feel as though you’ve gone to hell – and you’d be right. Like Michigan, Norway is home to a town called “Hell,” with more than a thousand Norwegians able to claim themselves to be Hell Dwellers.

Norway Has An Interesting Geographical Location

Now it’s time to get into some classic geographical Norway facts.

But first, let’s back up a bit – Fennoscandia? What’s that? Well, it’s the peninsula most people mistake for and conflate with “Scandinavia.” While the venerable CGP Grey is right in saying only the most diehard geography geeks tend to use that name outside of those involved in the region, that is the proper name for the area in which Norway is situated.

Furthermore, the Fennoscandia Peninsula stretches a lot further east than you might imagine. The easternmost tip of Norway reaches Russia, with the only road there being a border crossing which stretches 120 miles long. That means that while nearly all of Finland is east of Norway, one tiny town, Kirkenes, is actually nine miles further east. This makes for an interesting linguistic situation, with Russian being quite prominent in the area alongside the native Norwegian, with a fair bit of English speakers sprinkled in as well due to tourism.

Norway Is The Birthplace of Skiing

It should not come as a surprise to learn that Norway is the birthplace of skiing. After all, with its snowy ski-friendly terrain, few countries in the world are better suited to the sport than Norway. What’s more, skiing and Norway actually go a long way back. While the Norwegian sportsman Sondre Norheim is largely credited with inventing modern skiing in the 19th century, archeological evidence has shown skiing in one form or another has been practiced in Norway for thousands of years.

The town called Longyearbyen is the northernmost settlement in the world. It’s located on Spitsbergen island, a truly unique place. It’s where for 4 months of the year people see no sun (it’s completely dark), for 4 months there is no moon (it’s always a day), and where there are more polar bears than people.

Longyearbyen has only 1,000 citizens, the rest are people who come work on the island for a few months. Most of them are unable to stay longer, as it’s really hard to live in such a difficult environment.

On a related note, Norway reigns supreme in the Winter Olympics. Following the 2018 Winter Olympics in Seoul, Norway holds the record for both the most total medals (368) and most golds (368). Even Norway’s royal family has gotten in on the action in the past, with King Olav V scoring a gold medal in sailing in the 1928 Games. 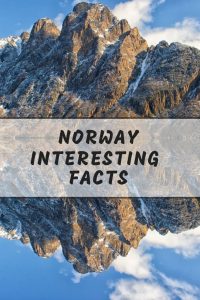