Interesting Malaysia Facts That You Probably Haven’t Heard Of!

Malaysia is a country full of contrasts and surprises. What are the most interesting Malaysia interesting facts? What is special and unique about this place? Keep on reading and you will find all the important, funny and weird facts about Malaysia below!

Malaysia Is A Colonial Country

Almost all countries in South East Asia have been colonized. Malaysia wasn’t an exception. Through the years it has been under Portuguese, Dutch and British influences. It became independent in 1957 but the borders of the newly created country weren’t finally established until 1965.

You can see the impact of colonial influences everywhere in Malaysia, especially when it comes to building and architecture. One of the most famous colonial towns is Malacca– we absolutely loved this place! It looks like a little Dutch town, with a beautiful river and bridges.

Malaysia Is A Multicultural Country

One of the other Malaysia interesting facts is that the standard of living in Malaysia is quite high compared to other countries in Asia. That’s why it has many immigrants, especially from China and India.

If you walk the streets of Malaysia, you’ll find almost every nationality there. You can also hear different languages at the same time. We love the diversity of people, cultures, and food in Malaysia.

Even though everybody is so different, they have somehow found a way to coexist in the same place and accept each other. It’s one of the things that makes this country beautiful.

Alcohol In Malaysia Is Very Expensive 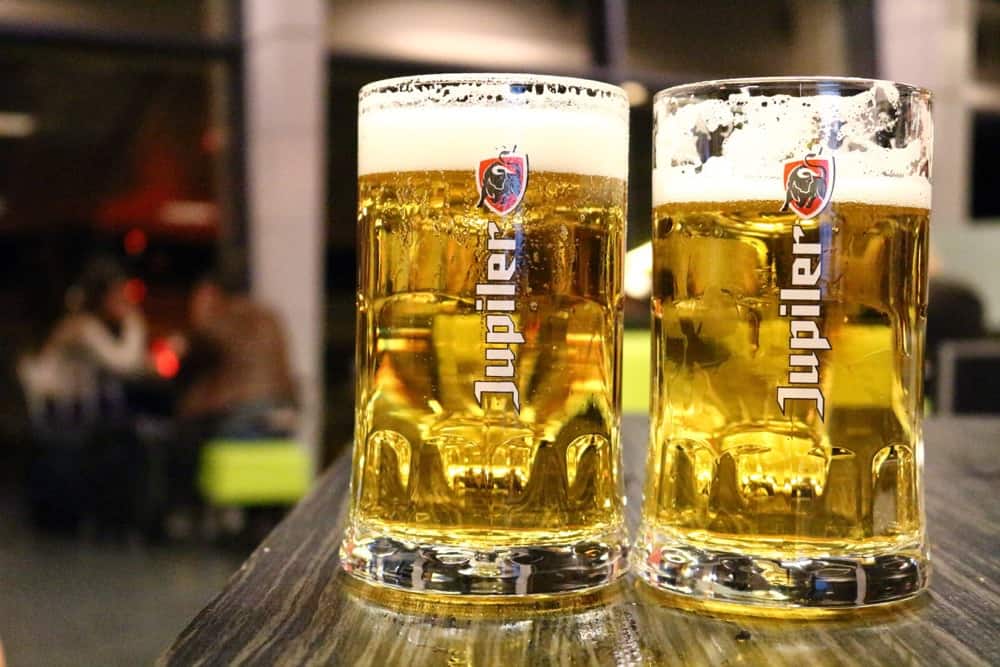 Prices in Malaysia are quite low. Everything is cheap, including food, clothes, and accommodation. But here’s one of the interesting Malaysia facts. The only thing that is really expensive in comparison to other countries in South East Asia is alcohol.

For one small can of beer you need to pay at least 8MYR ($2). The cheapest wine would cost 32MYR ($8). It’s still less than in countries such as Australia or USA, but compared to the cheaper cost of living in Malaysia, alcohol is very expensive.

That is the thing we just couldn’t understand. Almost EVERYBODY speaks English in Malaysia, no matter if it is a taxi driver, a salesman or a random person on the street, whom you ask for help. Almost every TV and radio station is in English. More than 50% of newspapers are written in this language too. And most of their spoken English is a mix of English with words from local languages, that’s locally called Manglish. Despite all these facts, English is not an official language in Malaysia. Bahasa Malay is the official language in Malaysia.

And although Malaysians will not accept English as an official language because of their colonial past, the multiculturality of Malaysia makes its use essential. The only way ethnic Malays can communicate with the Indian or Chinese immigrants is in the English language.

Malaysia has some of the most beautiful street art in the world. Paintings on the wall here don’t look like an act of vandalism, but more like an art form. Every graffiti has a different story to tell and it usually represents the history of the place and of its citizens.

Street art can be found almost everywhere in Malaysia, with the most famous being the wall paintings in Kuala Lumpur, Penang, and Malacca.

At the beginning, we thought that it’s a scam and they will double charge us for everything. But it turns out, Malaysian people call their currency dollar without any real reason. Maybe they just want it to sound the same as in Singapore?

Paying in REAL dollars (US$) is forbidden in Malaysia, so prices are shown everywhere in Ringgits. MYR 1 = USD 0.25

Singapore Belonged To Malaysia In The Past

It is funny but when we talk to the people we meet on the road, some of them still think that Singapore is a city in Malaysia. It is not! It became independent in 1965 and has been a separate country for more than 50 years now.

Malaysia and Singapore are still connected to each other, especially when it comes to tourism. But the government and the law are completely different and independent of each other.

Jimmy Choo Is From Malaysia

Here’s one of the Malaysia interesting facts that women will love! Have you heard of Jimmy Choo? He’s the most famous shoe designer in the world. Almost every woman dreams about having at least one pair of his amazing heels.

Only a few people know that he was born and raised in Penang, Malaysia. His father was a shoemaker and he taught him everything. Jimmy made his first pair of shoes when he was 11 years old.

When he was older, he moved to London and built his business worth millions of dollars.

Caning Is A Popular Punishment In Malaysia

It’s quite surprising that caning is an official punishment in Malaysia! It may be a court sentence only for men. Women, boys under 10, men older than 50 years old (except those convicted of rape) and people sentenced to death cannot be caned. The maximum number of strokes that can be given is 24.

Caning is also a common punishment in school, for male students who have committed minor offenses.

Beating can be also ordered by Sharia court, only for Muslims, both men, and women.

The largest flower in the world, the rafflesia grows in Malaysia in the Kinabalu National Park. Also called corpse flower, the parasitic rafflesia emits a stench that attracts flies for pollination. The flower can grow up to 3 feet wide and weigh 7 kgs.

The Durian Is Called The King Of Fruits In Malaysia

The distinctive taste of the durian and the custard-like flesh has made Durian famous. Some love it, some hate it! It has such a strong odor, that it’s banned from many hotels in Malaysia.

The famous food writer Richard Sterling described the smell of durian as “pig shit, turpentine and onions garnished with a gym sock”, while novelist Anthony Burgess described it as “eating sweet raspberry blancmange in the lavatory”.

On the other hand, the 19-century British naturalist Alfred Russel Wallace described the Durian as “a rich custard highly flavored with almonds”. This sounds enticing. Try it when you visit and let us know if you love or hate it.

The other UNESCO listed sites in Malaysia are Gunung Mulu National Park in 2000, Melaka and George Town, Historic Cities of the Straits of Malacca in 2008, and Archaeological Heritage of the Lenggong Valley in 2012.

Gunung Mulu National Park in Borneo is home to over 295 km of caves filled with bats. It’s also home to the largest cave chamber on earth, the Sarawak Chamber.

The 1-mile long Deer Cave is also famous for being long enough to hold 5 rows of 8 Boeings parked close to each other.

Built in 1998, the Petronas Towers in Kuala Lumpur, Malaysia have a height of 451.9 meters or 1483 feet. This makes them the tallest twin towers in the world! They’re also in the top 20 list of tallest buildings in the world.

There Are Many Venomous Snakes In Malaysia

There are many venomous snakes in Malaysia. These include the Malayan Pit Viper, the sea snake, and the cobra.

Some of the snakes are also the longest. The longest king cobra was over 18 feet and a member of the London Zoo till the mid of the 20th century.

Malaysia Is A Country Of Two Halves

Malaysia is literally a country of two halves. West Malaysia on the left is home to Kuala Lumpur and beaches, while Borneo on another island is home to Sarawak and Borneo’s rainforests.

Malaysia is also home to the Doctor Fish or Garra Ruffa fish that eat dead skin.

Perfect for a natural pedicure! So if you’re looking for one, head over to Malaysia!

Festivals And Torture Are Related in Malaysia

During the Hindu festival of lights called Deepavali, Malaysian devotees impose undertake Vel Kavadi. This is a type of self-inflicted torture where they pierce their mouths and cheeks.

Interesting though is that they don’t bleed or feel any pain. Most onlookers claim they appear to be in a trance-like state.

Babies In The Iban Tribe Are Called Worms

When they’re born, the babies need to be named after dead relatives because naming them after live relatives will shorten the baby’s lives.

Once the parents make a selection of names, the tawai cocks or fighting cocks are used to fight and the rice ball with the baby’s name that lasts determines the outcome.

Malaysia Was Known As The Peninsula Of Gold

Back in AD 150, Malaysia was called Aurea Chersonesus or the “peninsula of gold” by the Greco-Roman geographer Ptolemy.

Malaysia Has Their Own Number 13

Friday the 13th sounds scary to you? Well, if you’re in Malaysia it will be number 4. The sound of four or sì in Chinese is similar to the sound of death.  That’s the reason many buildings in Malaysia don’t have the fourth floor. You might find a 3A though.

There Is Treasure On The Floor Of The Strait Of Melaka

A treasure of over USD 9 billion was recovered from the Flor De La Mer which lies at the bottom of the Melaka Strait. Sunk in July 1511, this Portuguese ship that was captained by Admiral Alfonso d’Albuquerque held one of the largest treasures ever lost. Most of it is now in Sotheby’s in London.

Other Interesting Facts About Malaysia

Did you know these facts about Malaysia? Do you know any other interesting information about this country? Share your thoughts in the comments!