What To Eat in Romania? Traditional Romanian Food You Need To Try!

To start with, you need to know that traditional Romanian food is absolutely delicious! It’s based on organic and fresh ingredients, and you can feel the quality with every bite you take. Even though there are some vegetarian options available, Romanians love eating meat, especially pork, beef, and lamb. Romanian desserts are one of the best we have had in Europe (fun fact- did you know that pancakes actually come from Romania?). When it comes to alcohol, beer and wine in Romania are the most popular.

Traditional food in Romania is not only delicious but also pretty cheap. You will pay less than $10 for a meal in a good restaurant. The snacks cost less than $1, so this country is definitely is a perfect destination for foodies traveling on a budget!

Enough about the basics, let’s talk about the dishes! Here is the most famous Romanian food:

The soups in Romania are one of the best in Europe. They are all unique and delicious! No matter if you order a simple veggie or the one with meat, you can be sure it will be delicious.

Ciorba means soup in Romanian, so if you don’t know what to order, go with any ciorba and you probably won’t be disappointed.

Never in my life would I expect that I will fall in love with… the tripe soup. It sounds quite disgusting but trust me, it’s one of the best Romanian food!

This sour, creamy, Romanian beef soup is full of flavors and it’s surprisingly delicate. In fact, you wouldn’t guess that you are eating cow’s stomach unless someone told you. It is served with bread and it’s filling enough to be the only meal eaten for a dinner or lunch. The cost of ciorba de burta is typically between 10 to 25 RON ($3-$7).

This Romanian soup is Patryk’s favorite. He’s been eating it for lunch almost every day. It’s made of beans, meat, tomatoes, and other veggies. Sometimes it’s served in bread.

Even though it’s called a ‘salad’, it’s actually an eggplant spread. It tastes best with bread.

Salata de Vinete, one of the most popular Romanian food, is made of onion (sometimes garlic is added as well), that’s why you will be left with bad breath after eating it! Still, this spread is worth trying as the taste is quite unique.

If you dine in a traditional Romanian restaurant, you will probably get jumari as an appetizer.

This Romanian cabbage dish is pretty similar to Polish golabki. The minced pork and rice are wrapped in cabbage leaves.

They are often served with mamaliga, Romanian cornmeal porridge and sour cream on top. This dish is called Sarmalute Cu Mamaliguta.

Easy to guess, once you have it all, you won’t be able to eat anything else this day. It’s really satiating.

You can feel a Turkish influence on Romanian cuisine while eating Mici. These small grilled sausages are made of different kinds of meat, including lamb, pork, and beef.

They may be served with french fries or bread. Mici is the most famous Romanian sausage, however, the others are worth trying as well. The quality of Romanian meat is really high.

If you wonder what do Romanians eat for breakfast, here are their most popular choices:

If you want to try traditional Romania breakfast, the first thing you need to have is bread. To be honest, Romanian bread is one of the best we have ever had. It’s fluffy, made of white flour, and it tastes best when it’s fresh. Many restaurants have their own unique bread recipes. No matter where you have it, it’s always yummy.

Like in many other countries, eggs are popular for breakfast in Romania as well. What’s interesting, you can’t really have scrambled eggs in here. You will get an omelet that is cut into pieces. 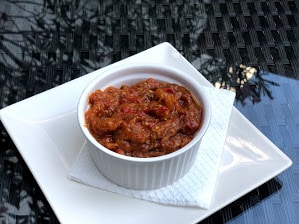 Every housewife has her own zacusca recipe: some of them use mushrooms, some celery, some carrots.

The basis of this Romanian vegetable spread are eggplants, onions, red peppers, tomatoes, oil, and of course salt. 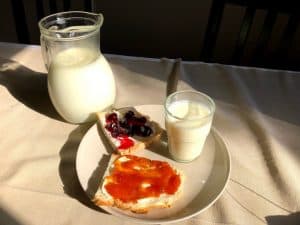 Traditional Romanian breakfast can sometimes be sweet. Some people eat bread with butter and homemade jam.

Romanians love their cheese. There are usually salty and made of cow or sheep milk. If you are interested to read more about Romanian cheese, check out this post.

The cheese is usually served with vegetables, such as cucumbers, tomatoes, pepper, or red onion.

It is a Romanian national food. Traditionally, polenta was served for breakfast. It’s simply because this dish is cheap, so even the poorest could afford it. Right now, it’s too basic to eat, so it became one of the most popular Romanian side dishes. 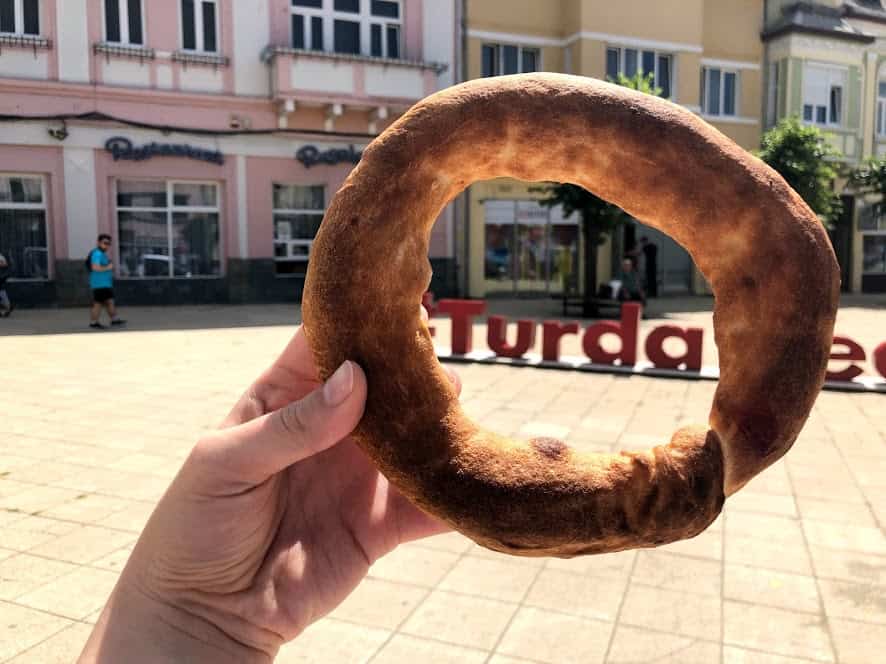 It’s one of the best snack EVER! This ring-shaped Romanian pastry may be plain or go with a filling (cherry, cottage cheese, chocolate, vanilla, and more).

The absolute best we have had can be purchased at Gigi. It’s a Romanian bakery chain, be sure to check if there is any Gigi around you and get their warm covrig cu visine!

This roll filled with cabbage is a perfect snack for those who don’t like sweets. It’s savory and quite similar to other cabbage pastries that you can find in Eastern European countries.

The only difference is the shape- you can’t really guess what’s inside until you take the first bite.

This pastry is actually a sweet cottage cheese covered with a thin layer of soft dough.

Even though poale-n-brau is quite small, it is really satiating because of the enormous amount of filling inside. Yummy!

These round donuts usually come with filling inside. Sometimes they are plain. They usually have a powder sugar on top.

Gogosi are very similar to donuts in other Eastern European countries, like for example paczki in Poland.

The other famous Romanian pastries that are worth trying are cozonac and pasca tanti vali.

Did you know that pancakes are originally from Romania? They are so delicious! Palacsinta are crispy, sweet and they have different fillings.

The most popular are the ones with nuts, poppy seeds, fruit jams, or sweet cottage cheese.

Romanian sweets are really good. There is one thing Romanians can’t do right though- it’s the chocolate. No matter if we tried Romanian street food, dine in a fancy restaurant, or buy a candy bar in a shop, the chocolate was always bad. The main reason is that the percentage of cocoa was always low, while there was a lot of sugar and fat.

Chocolate is probably the only thing we didn’t like about Romania food. But you are not traveling to this country to eat chocolate, right?

Romanian Salami Cake is made of cookies, cocoa, and a bit of rum (or rum aroma).

One of the reasons why it became one of the traditional Romanian desserts is because it doesn’t require baking. All the ingredients should be mixed together in a pot and then placed in the fridge to cool off.

These fried donuts are usually filled with soft cheese and served with sour cream and fruit jam. The combination of warm pastry and cold sauces make it a perfect dessert.

This dessert can actually be an entire lunch meal. Clatite Brasovene are warm pancakes filled with sweet cottage cheese.

They are either placed in a pot or on a plate. Sometimes they are served with powder sugar on top.

Other Traditional Food of Romania Worth Trying

I am not mentioning these dishes in the previous paragraphs on purpose. They are simply difficult to find in the ordinary Romanian food menu. We’ve been hunting for them all over Romania and either they were not available in menu or we needed to order them 24 hours in advance. If you are lucky enough to spot them somewhere, you should definitely try them! 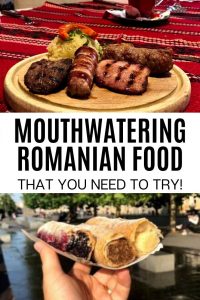