Fun Lithuania Facts That You Probably Haven’t Heard Of!

Looking for fun Lithuania facts? This country has always been in an interesting position geographically and politically speaking. On the one hand, it has historically been considered a Baltic state, and was one of the satellite Soviet republics which made up the USSR in the 20th century. On the other hand, despite its status as one of the gateways to the Balkans and its complex relationship with the other Balkan states as well as Russia, Lithuania has carved out a unique place for itself in the pantheon of European nations.

To underscore the intrigue surrounding Lithuania’s status, let’s take a deeper dive into one of Europe’s most overlooked countries with these fun facts about Lithuania.

Lithuania Was Depended On Russia For Many Years

While much of the rest of this list will deal with Lithuania’s unique cultural heritage, as stated, they were a part of the USSR – and if you doubt that fact, try visiting the Soviet Bunker along Road 102, about 25 km from Vilnius. The tongue in cheek roleplay site allows guests the “experience” of returning to a Soviet way of life circa 1984 (and what could ever be suspicious about that date?).

Historical kidding aside, Lithuania’s real-world history in the mid to late 80s is among the bravest of any country behind the Iron Curtain. In 1989 they formed a compact with Estonia and Latvia as the three tiny Baltic States engaged in a peaceful protest against the Soviet Union in its waning days.

This wasn’t just an idle protest, either. More than two million people joined hands to form one of the longest human chains of all-time, stretching 600 km across all three countries.

The three tiny states were the first Soviet satellites to declare independence from the Soviet Union, one of the biggest David versus Goliath stories of modern European history.

Lithuania declared independence in March of 1990 and Russia accepted it a year and a half later.

Lithuania Is Located In The Heart Of Europe

If most of your facts about Lithuania comes from what you see on a map, chances are that you think of it as being on the fringes of Eastern Europe.

Lithuania Had Some “Interesting” Advertising

Don’t think that Lithuania hasn’t been able to capitalize on its status as the center of Europe, either.

In 2018, Vilnius ran a tourism campaign declaring itself “the G-Spot of Europe” because (and we quote) “Nobody knows where it is but when you find it — it’s amazing.”

Vilnius Is A Window Into the Past

For as sly as it may be, that advertising campaign is right – for as overlooked as Vilnius may be compared to other European cities, it really is a diamond in the rough and a window into the past.

That’s because, for as much as the city has changed hands as Lithuania has been caught between German and Russian invasions over the centuries, Vilnius’ Historic City Center is one of the best-preserved examples of Medieval, Renaissance, and Baroque architecture in Europe.

The entire Old Town area is a UNESCO World Heritage site, a rare feat and one that speaks to Vilnius’ unique centralized location and status as a crossroads between Eastern and Central Europe shines through. Lithuania has historically been part of the now-defunct Grand Duchy of Lithuania and Polish-Lithuanian Commonwealth as well as what is now Germany and Russia.

In fact, while today Lithuania is often seen as being dwarfed by its massive neighbor to the east in Russia, in the 14th century the Grand Duchy of Lithuania was the largest nation in Europe.

Every phase of that multicultural heritage is represented in the architectural makeup of Vilnius, with some of the most prominent examples being:

The Gate of Dawn

Built between 1503 and 1522 as one of nine gates to protect the city. It is the last remnant of those walls and houses and an icon of the Virgin Mary which is worshipped by Catholic and Orthodox visitors alike.

A testament to the city’s long architectural history, the original town hall was built in a Gothic style in 1432 before being rebuilt in a classical style. It has received foreign leaders such as George H.W. Bush and Queen Elizabeth II.

The oldest university in the Baltic States and one of the oldest in Europe, Vilnius University has been shaping young minds since 1579.

The last remaining part of the Upper Castle of Vilnius, completed in 1409. It is an excellent example of late Medieval tower construction and a national symbol across Lithuania. It features on the national currency and is referenced in several national songs and poems.

Lithuania loves its hot air balloons so much that a popular national dish, Cepilin, is named for zeppelins. For the curious, these zeppelin-inspired recipes are meatball-sized dumplings mixed with potatoes and cheese.

There Is A “Republic” Within Lithuania

If you weren’t able to tell from that “G-Spot of Europe” advert, Lithuania has a strong sense of humor, and nowhere is that more evident than in the nonrepublic Republic of Uzupis.

The whole “republic” is located within that one neighborhood of Uzupis, with its entire “army” consisting of 12 people. The neighborhood stands a parody of nationalism and a national in-joke, but it’s one that has a tinge of poignancy to it. After all, they erected a statue of counterculture icon Frank Zappa as a symbol of freethinking and independence – two things deeply embedded in the Lithuanian national character.

Lithuanian Language Is One Of The Oldest In Europe

In keeping with the national identity of being at the center of European life, Lithuanian is one of the oldest spoken languages in Europe. In fact, it’s so old that it actually has some root words in common with Sanskrit, giving it a bit of overlap with some modern Indian languages.

Lithuania’s language is such an integral part of its identity that it boasts a whole host of other quirks which feed into its cultural heritage.

Eastern European nations like Russia have patronymic naming conventions, and Lithuania is no exception, with women traditionally adding “ienė” to their last name when they marry, and “-ytė or -aitė” being for single women.

That said, they may have to change those letters around more than they’d like, because Lithuania has the third-highest rate of marriages lasting less than a year among European nations.

Lithuanians Have A Pretty Unique Way Of Celebrating Famous Holidays

As a country with a long tradition and a quirky side, you might expect Lithuania to have a few interesting twists on traditional Christian holidays such as Easter and St. Patrick’s Day, and you would be correct.

For one thing, Easter eggs aren’t brought to children by the Easter Bunny in Lithuania but rather Lithuania’s own mythical figure, Velykų Bobute. Bunnies help her decorate the eggs, but she’s the one who does the delivering while arriving on a sunbeam (which makes just as much “sense” as bunnies and eggs, quite frankly).

Meanwhile, St. Patrick’s Day sees the River Vilnia dyed green in celebration. This practice began in the 1960s, after plumbers in Chicago discovered a way to dye water without making it unclean.

It’s A Land of the Storks

For generations, parents who have been asked the eternally awkward question “Where do babies come from?” by children too young to know the truth have traditionally answered “the stork.”

While that may be a lie, the truth of the matter is Lithuania is the stork capital of Europe, with more than 50,000 of these majestic birds calling the country home.

So many storks live in Lithuania, in fact, and their impact on the culture has been so deep that the nation is sometimes called “the country of storks.” In fact, white storks have been a national symbol of Lithuania for centuries, and was declared the state bird in 1973.

Last, but not least, on this list of Lithuania facts, if you’re an arborist or just fond of trees, you’ll definitely want to pay a visit to the Stelmuze Oak. The tree measures 3.5 m in diameter, is 13 m at its widest point, and is 23 m tall. In 1960, it was declared a national monument and is included on a list of objects protected by the government.

It is the oldest tree in Europe, and has survived since the Crusades. In fact, the tree’s true age may stretch back further than that, with some estimates placing it at 1500 to 2000 years old, though only side branches are alive today.

It’s a quirky little tree that’s seen a lot – which is a perfect symbol for Lithuania itself.

Depending on your religion, this hill may be considered as a unique pilgrimage site or one of the world’s creepiest places.

There are thousands of crosses on the Kryžių kalnas, located in northern Lithuania. Read more about this unusual place here. 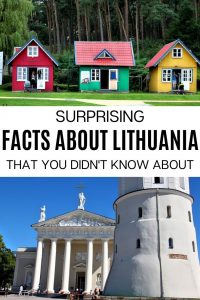