Top Off The Beaten Path Travel Destinations Around The World!

Top Off The Beaten Path Travel Destinations That Will Steal Your Heart!

The following countries are not always the first pick for a holiday. However, if you want to think outside the box, you will find that the following places are ideal off the beaten path travel destinations! They are not only affordable but also quite safe to travel.

The nation borders the countries of Bangladesh, India, Laos, China, and Thailand. Formerly called Rangoon, Yangon is Myanmar’s largest city – a bustling place that is home to lakes, parks, a variety of markets, as well as the impressive Shwedagon Paya. The capital of the country is Naypyidaw, and the official language is Burmese. If you are looking for the affordable off the beaten track holidays, that maybe your place to go.

The Shwedagon Paya – A Major Attraction

Shwedagon is one of the most beautiful places in Myanmar. This Buddhist site is a structure that is adorned in golden leaf along with thousands of gems and diamonds. You can get to the main terrace by way of four stairway entrances. You can feel the peace of the place during the early hours of dawn.

This dome-shaped Buddhist shrine, which is called a stupa, sits aloft on a hill that is about 167 feet above sea level. The entire complex covers an area of about 114 acres.

Like all other temples of this type, the primary terrace is entered by four covered walkways, which are known as zaungdan. If you want to avoid climbing steps, you can access the temple though elevators or escalators.

One of the reasons why Myanmar is such an epic off the beaten path travel destination is because of its temples as well as its beautiful lakes.

Besides Shwedagon Paya, you will want to visit the Ngahtatgyi Paya in Yangon as well as the Mahamuni Paya in Mandalay. Inle Lake in Myanmar is a glorious natural sight to behold during the sunset hours of the day.

Enjoying the Simple Things in Life

Wherever you go in this Southeast Asian country, you will be greeted by an ever-present energy as well as the simple pleasures of traveling – pleasures that include treks through pine forests or cruises on old river steamer boats down the Ayeyarwady River. Keep this destination first and foremost on your bucket list.

Poland, in Eastern Europe, lies on the Baltic Sea. Known for its Jewish heritage and medieval architecture, the country is home to the charming and historic capital of Warsaw.

Krakow, another must-see city, is known for its iconic Wawel Castle, a fourteenth-century structure that takes you back to another time and place. Indeed, you will know that you have made the right travel decision when you visit Rynek Glowny and experience the Renaissance trading site known as Cloth Hall.

Other points of interest include the Tatra Mountains and the cities of Gdansk and Zakopane. Zakopane itself is a resort town that is located at the foothills of the Tatra Mountains. Skiers and hikers enjoy this storybook destination, which is known for its charming wooden chalets.

Ukraine is noted for its Orthodox churches and forested and montane landscape.

Situated next to the Black Sea, the country’s capital is Kyiv. Other interesting places in Ukraine include Lviv and Odessa.

In Kiev, visitors automatically are drawn to St. Sophia’s Cathedral, which frescoes and mosaics are works of art the traveler must-see.

You cannot help but love Kyiv when you walk the cobblestone Andriyivskyy Descent, which serves as the link between upper and lower Kyiv. The incline is not hard to spot as it begins at the baroque and stately building of St. Andrew’s church.

If you want to experience Old World history first-hand, and go to one of the cheapest off the beaten path travel destinations in Europe, you will find Ukraine to be as inviting as it is culturally appealing.

Situated in southeastern Europe, Romania is known for Transylvania, a storybook-type wooded enclave that is surrounded by the Carpathian Mountains.

The country is defined by medieval towns and memorable churches and castles. Of special note is Bran Castle, which is associated with the legend of Dracula.

The capital of Bucharest is also the site of the massive governmental structure, the Palatul Parlamentului building.

Besides Bran Castle, you will want to make sure to visit Peles Castle, the beautiful Cluj Napoca, and Corvin Castle. Also referred to as Hunyadi Castle, Corvin Castle is a gothic-Renaissance structure in Hunedoara. The castle is considered one of the country’s seven wonders and one of the best places to visit in Romania.

Plus, Romanian food is absolutely delicious!

A landlocked country, Ethiopia is located in the Horn of Africa or HOA. The HOA, which is a peninsula, is located in Northeast Africa. Countries that border Ethiopia include Eritrea, Djibouti, Somalia, Sudan, South Sudan, and Kenya. The country does not have an official language, but its working language is Amharic.

Some of the points of interest in this underrated travel destination include the Orno National Park, the Blue Nile Falls, and Lake Tana. The capital of Addis Ababa is located in the highland area that is adjacent to the Great Rift Valley. Above the city is Mount Entoto, which offers panoramic views from its eucalyptus-covered slopes.

Be sure to visit the St. George’s Cathedral in the city, which is noted for its mural display, colorfully crafted by artist Afewerk Tekle. Also, you will not want to miss a visit to the Holy Trinity Cathedral, a copper-domed neo-baroque landmark that is the resting place of Ethiopia’s Haile Selassie, who ruled during the twentieth century.

Sitting on the equator, Ecuador is a South American country that lies on the country’s west coast.

Part of the country’s diverse terrain includes the Amazon rainforest. It is also home to the Galapagos Islands and the Andean highlands.

The capital of Quito is known for its Spanish colonial center, which features palaces and religious buildings from the sixteenth and seventeenth centuries. Some of the points of interest in this Spanish-speaking country include the Compania de Jesus church and the Cotopaxi National Park.

Besides Quito, other destinations of note include Loja and Guayaquil. Guayaquil, which is a port city, is known as a portal to the Galapagos Islands and Pacific shores. Take the stair-lined path up to the Santa Ana Hill, which offers spectacular views of the city.

Located in southwest Africa, Namibia is known for the Namib Desert that spans the country’s Atlantic coast.

Home to a diversity of wildlife, Namibia, is also known for its population of cheetahs. The capital city of Windhoek and the country’s coastal town of Swakopmund feature buildings that were built during the German colonial era. For example, the capital’s Christuskirche was built in 1907.

If you visit the north, you can see such wildlife as giraffes and rhinos in the Etosha National Park. Other natural sites you want to include on your itinerary include Fish River Canyon and Sossusvlei. Sossusvlei is a clay and salt pan that is ringed by towering red dunes. It is situated in the Namib-Naukluft National Park in the southern section of the Namib Desert.

This Arab country is located on the Jordan River’s east bank. Jordan, which is highlighted by seaside resorts, ancient monuments, and natural sites, is best known for the archaeological site of Petra, which was a Nabataean capital around 300 BC.

Besides Petra, the country is also home to the capital city of Amman and the southern city of Aqaba. Popular attractions also include Mount Nebo and the Dead Sea. The Dead Sea, which is located on the west bank of Jordan, close to the border with Isreal, is a salt lake whose banks are known as the lowest point on dry terrain. Because of the lake’s hypersalinity, people can easily stay afloat while they are swimming.

If you visit southern Jordan, you will be greeted by the Wadi Rum, which is a protected desert wilderness area. Some of the natural sights to see include the Burdah Rock Bridges and the Jebel Um Ishrin. The area’s Lawrence’s Spring is named for Lawrence of Arabia, who was said to have cleaned himself in the waters.

Located in Central America, Guatemala lies just south of the country of Mexico. The country, which is home to rainforests and volcanoes, also features ancient Mayan sites.

Visitors can enjoy the country’s culture at attractions such as the National Museum of Archaeology and Ethnology, which is located in the capital, Guatemala City.

Natural must-see attractions in the country include Lake Atitlan, Pacaya, Semuc Champey, the Santa Catalina Arch, and Tikal. Tikal is a Mayan citadel that is found in the rainforests of the northern part of the country.

The site, which thrived between 200 and 850 AD, was abandoned after that time period. Some of the iconic ruins include the Temple of the Grand Jaguar as well as the Temple IV, which is the tallest pre-Columbian structure in this part of the world.

Georgia is a country that is located between Europe and Asia. Once a part of the former Soviet Republic, it is home to Black Sea beaches and the Caucasus Mountains.

The country is known for the monastery called Vardzia, which dates back to the 1100s, as well as the wine-growing region of Kakheti. A visit to the capital city of Tbilisi will indeed take you back to another time, given the city’s maze of cobblestone streets and a variety of historic buildings.

Other attractions that should be included on a Georgian travel itinerary include Narikala, Mount Kazbek, the Gergeti Trinity Church, and the Svetitskho Cathedral. The Svetitskhoveli Cathedral, which is found in the town of Mtskheta, is located northwest of the capital. This Eastern Orthodox church has been designated as a World Heritage Site. Heraclius II of Georgia and Vakhtang I of Iberia are two of the notable rulers who are buried at the site.

Estonia is a Northern European country that lies on the borders of the Gulf of Finland and the Baltic Sea. The diverse landscape of the country includes rocky shores, numerous lakes, and old-growth woodlands.

Once a part of the Soviet Union, Estonia is defined by hilltop fortresses, churches, and castles. The country’s capital, Tallinn, is recognized for its Old Town and the Tallinn TV Tower, which features an observation deck.

Some of the major attractions include the Alexander Nevsky Cathedral, the Raekoja plats in Tallinn, and Kumu. Kumu is an art museum located in the capital and is one of the biggest museums in the country as well as in northern Europe.

Besides the capital, other destinations of interest include Tartu, Parnu, and Saaremaa. Saaremaa is an Estonian island that is located in the Baltic Sea. It is known for its spas and beaches as well as for the medieval Kuressaare Castle, which is located in the island’s southern capital of Kuressaare. 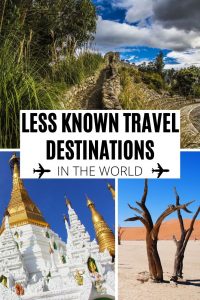